A Plan For Doctors And Professionals

Suppose you're a senior partner in a law firm and you want to maximize your tax-deferred savings for retirement. Your firm already sponsors a 401(k)/profit-sharing plan. But the most you can contribute in 2017 is $54,000, or $60,000 if you’re 50 or older. One way to sock away more is to establish a cash-balance pension plan. 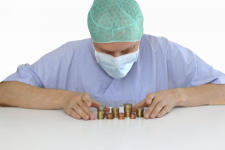 A cash-balance plan is a new variation on the traditional defined-benefit pension. As with a defined-benefit plan, an employer contributes to a cash-balance plan on behalf of its employees. The money that goes into the plan, as well as investment earnings, is shielded from creditors under the federal retirement law, ERISA. Yet whereas a defined-benefit plan calculates a retirement benefit for each participant based on such things as salary and length of service, the cash-balance plan is simpler. At retirement—or, if an employee is vested, when she leaves the company—the worker is entitled to the money that has been contributed for her, plus interest that accrues either at a fixed rate or at a variable rate tied, for example, to the yield on a one-year Treasury bill. She can take her pension either as an annuity or as a lump sum.


This type of tax-deferred plan can be added to an existing 401(k) or other retirement plan. And it can sharply increase the amount you're able to save. The senior partners in your law firm, for example, may qualify for contributions of more than $100,000 a year, up to a maximum of $215,000 (for 2017).

Businesses with more than one owner, including professional practices such as law firms, medical clinics, and dental groups, are ideal candidates for cash-balance plans after improvements in the 2006 pension overhaul, according to Jim Van Iwaarden, a consulting actuary in Minneapolis. The chief advantage for multi-owner enterprises is that the owners don’t end up paying one another’s retirement benefits. That happens sometimes with traditional pensions, Van Iwaarden says, especially if the owners vary in age or hold different percentage stakes in the company.

Cost is the primary drawback. This type of plan is typically more expensive to establish and operate than a traditional pension, and the company must contribute to workers’ nest eggs. Before starting a plan, you should make sure your cash flow is steady enough to fund the required contributions for at least five years, Van Iwaarden suggests.

But cash-balance plans also have cost benefits. One is that you can sort your company’s workers into different participant classes. You might have senior owners, junior owners, key employees, and other workers IRS rules require you to include in the plan. Each group gets its own formula for determining contributions, and you may be able to put in a smaller percentage of pay for the non-owner classes.


Of course, the plan can’t discriminate against the rank-and-file, and most cash-balance plans are operated in tandem with defined-contribution plans in order to meet IRS requirements for fairness. Keep in mind, too, that the sponsoring company bears the investment risk for these plans. You’ll need to earn a return on plan assets that’s adequate to fund the promised interest rate on employees’ plan balances.