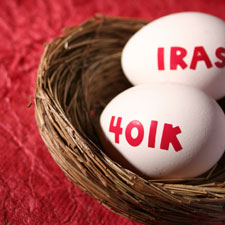 
With a 401(k) plan, you accumulate funds on a pre-tax basis. You make annual salary deferrals (of up to $18,000 in 2017, plus $6,000 if you’re age 50 or older) that may be partially matched by contributions from your employer. Some plans also permit after-tax contributions. Plan investments compound tax free, but distributions from the 401(k) during retirement are taxed at ordinary income rates, currently as high as 39.6% plus the state tax obligation.

A Roth IRA works the other way around. Money goes in after taxes have already been paid, but qualified distributions, assuming the Roth has been around for at least five years, aren’t taxed. To qualify for a tax-free, penalty-free distribution, you have to be at least age 59½, though exceptions are made in the event of death or disability, or to pay expenses for a first-time homebuyer (up to a lifetime limit of $10,000).


You can convert a traditional IRA, built with pre-tax funds, into a Roth, regardless of the amount of your income. Previously, this was allowed only in a year in which your adjusted gross income was $100,000 or less. Beginning in 2010, however, the income ceiling was eliminated. That change is a provision of the Pension Protection Act of 2006, which also eliminated the need for a two-step move from a 401(k) to a Roth. (Some employers now offer an after-tax Roth 401(k) option, and these plans also can be rolled over directly to a Roth IRA.)

In a recent notice, the IRS sweetened this deal with the news that no tax is owed if you convert only non-deductible 401(k) contributions. In contrast, in any conversion from a traditional IRA to a Roth, all distributions must be based on the ratio of non-deductible contributions (ie., contributions that you can’t deduct from taxes) to the total value in all of your IRAs.


Determining whether a Roth IRA conversion is right for you depends on a number of factors including your age and tax bracket. Though the Roth conversion dance is simpler now, you may still need a partner. We can help you determine whether a one-step rollover is right for your unique situation.